Ecosystem is a game about life and its interactions. At its heart are evolving virtual lifeforms, who grow from synthetic DNA and live in a physically-simulated ocean.

This synthetic DNA encodes everything about a creature, from skeletal structure to skin, from joint-types to mental processes. The genetic code of a creature can mutate, combine, be spliced with other species, and be directly modified by the player. 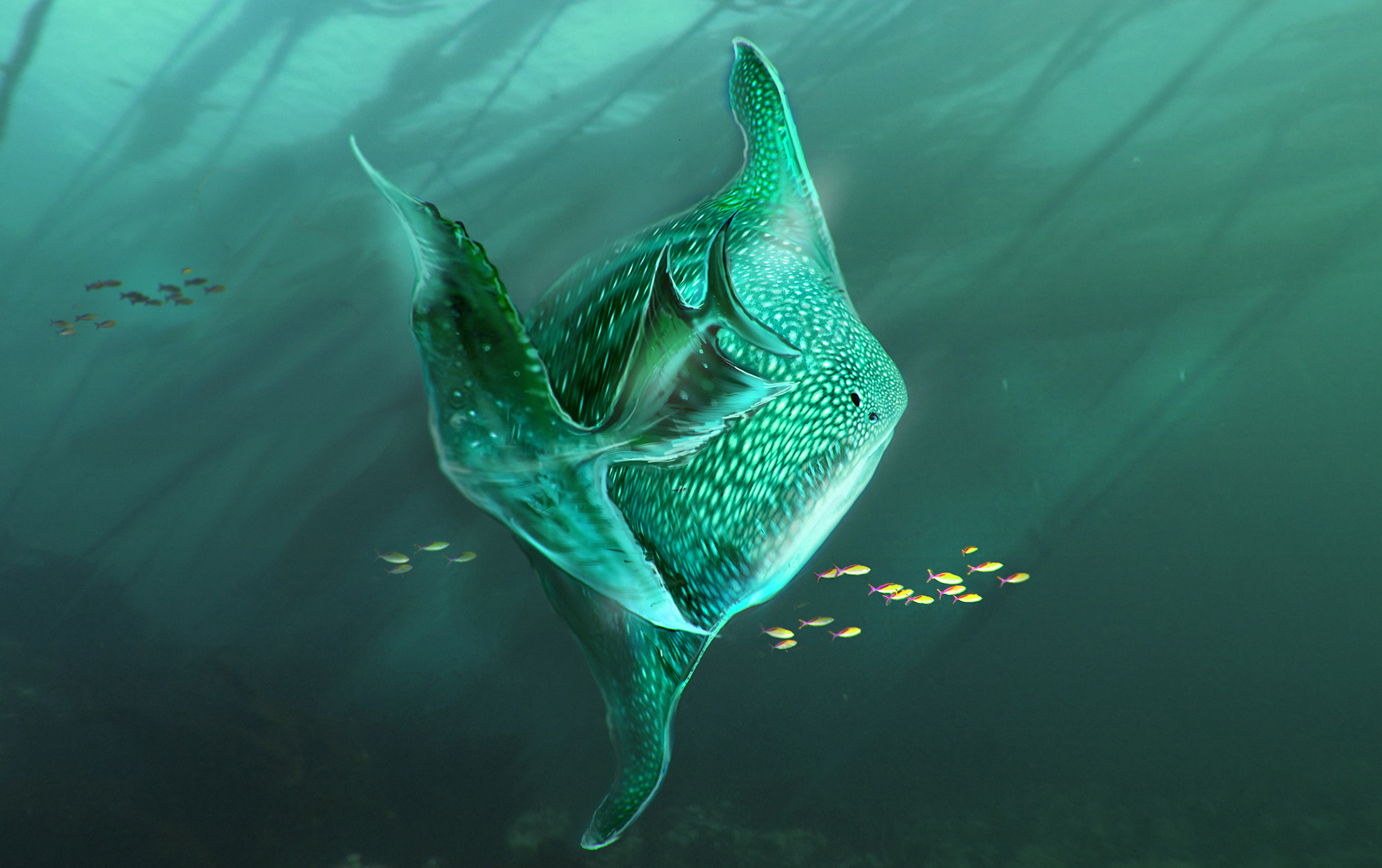 Creature brains are also encoded in DNA and subject to evolution. The neurology of a virtual lifeform is a pipeline computer where, every moment, data from sense organs is passed through a network of neurons and finally contracts a muscle in a specific body part.

To swim, creatures don’t just play an animation. They move like real sea-life, applying torque at their joints to push against the water in a way coordinated to propel themselves forward. Working within this physical simulation, evolution can produce an enormous variety of body shapes and swimming styles.

A wide variety of different creature populations share a single environment, where they swim, graze, prey on each other, and have children. The fittest creatures pass their genes along to their children, and over time a world of strange and unique creatures is born.

In Ecosystem, you control the environment and virtual lifeforms evolve to fill all the niches you create, deliberately or otherwise.

Ecosystems are fertile ground for a simulation game. Their functioning is influenced by the complex food web that determines how energy and nutrients flow through all the animals in the environment, but also by abiotic factors like sunlight, temperature, current, minerals, and water clarity. 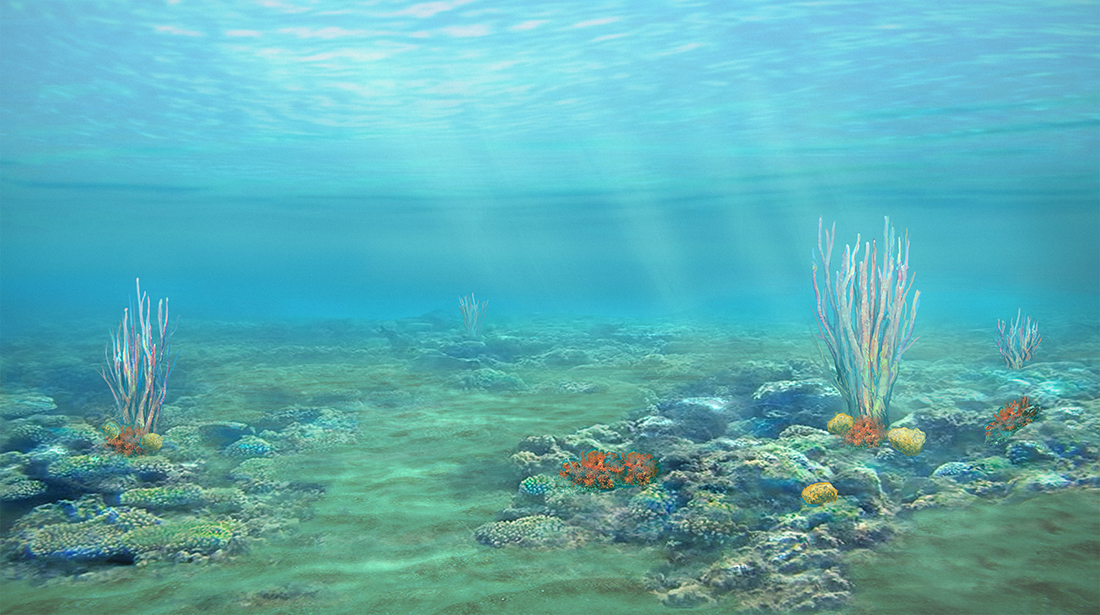 All of these factors influence each other, as well. Sediment in the water reduces water clarity, which also reduces sunlight. Upswelling currents bring nutrients that organisms need up from the seafloor. If a fish population that has been feeding on algae dwindles to nothing, the algae could grow until it strips out the oxygen from the environment and causes a mass extinction. 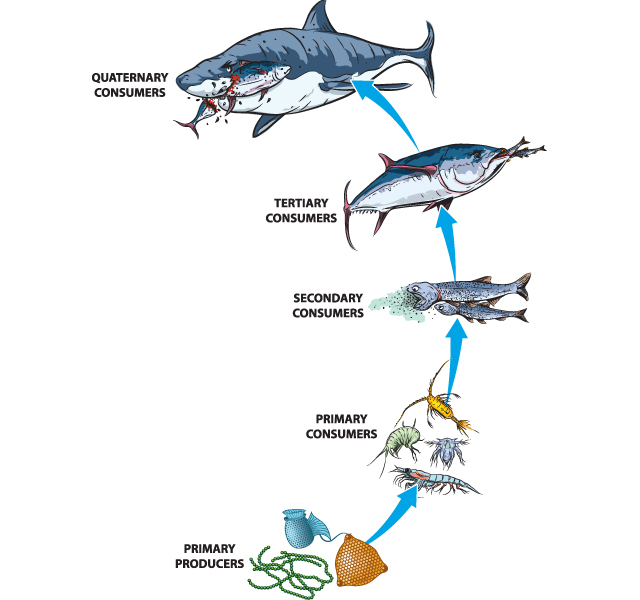 Intervening in such a complex system will involve a lot of unintended consequences and even disasters, but your interventions can help the ecosystem, as well. Lots of moderate disturbances can make an ecosystem healthier! They can create many small niches throughout the environment, leading to high biodiversity and an ecosystem that is more adaptable and able to weather big shocks when they come.

Every small interaction is influenced by a wide variety of environmental and genetic factors. Whether a predator sees a given prey animal depends on the width and height of its cone of vision, how different the prey’s skin is from the surrounding area, whether they prey is moving or still, and how much light or fog there is. All of these factors can spark unique adaptions and evolutionary arms races between species.

As the steward of your ecosystem, you can also take more direct control over the creatures that live there. You can perform artificial selection, culling creatures you don’t like and breeding the ones you do. You can adjust the shape of creatures’ bodies and the nervous system that determines how they swim. Even high-level behaviors, like whether they lurk and ambush prey, where their hunting grounds are, and how they migrate, are under your control.

You can also share the most interesting creatures you make or discover in an online database, and introduce new creatures from there into your environment. Not every environment supports every creature! A plesiosaur dropped into the modern world may simply be outcompeted and die off. Or maybe it would thrive: there’s only one way to find out. You can also play online, managing a shared ecosystem with friends or pitting your creatures against each other.

The core features of the game, such as the virtual DNA, the pipeline computer ‘brain’, and physically-based swimming have all been implemented. I’ve also created an evolution prototype where populations are seeded with random creatures and are assigned a genetic fitness based on their swimming speed or ability to seek a target.

An extensive variety of body types and swimming motions evolved: all the creatures shown in the trailer and the animations on this page evolved in this prototype; none were handmade by developers. I’ve also worked with two artists to develop custom heads and parametrizable materials for the creatures, and I’ve already integrated their work into the procedural mesh system in the game. I plan to collaborate further as the game progresses.

The main goal now is to get the game playable as soon as possible. The heart of this will be implementing systems that will drive the abiotic factors of the environment, and linking them to the living creature simulation. Another large class of tasks involves finishing work on editors for the environment as well as for creature bodies, nervous systems, and behaviors.

The sound design and musical score for Ecosystem is by Samuel Jule Kovacs. We also plan to work together on creature vocalizations, subjecting them to evolution as well, so that even the auditory environment of the game’s ocean is a living system. Sam has been a long-time collaborator and friend. He scored the trailer for Ecosystem, and our most recent game Enemy.